Henry A. Hoyt was a building contractor in business with his brother Frank L. Hoyt in Santa Rosa, California at the time of the 1906 earthquake. The Hoyt Brothers were integral to the rebuilding of the city, including the new Sonoma County Courthouse and the post office which now houses the Sonoma County Museum. Henry and Frank were born in Galway, Saratoga County, N.Y. in 1877 and 1881. They trained in architectural design and engineering in Wisconsin, where the family had moved in 1891. In 1901 the brothers moved to California, and by 1903 were settled in Santa Rosa. Henry married Ora Mabelle Smith in 1901, and they had one child, Frances Louise, born in 1907. The family lived in the house he built at 827 Spencer Street in Santa Rosa. (Gregory. History of Sonoma County, bio. sketches 1911.)

These vintage photographs of the extensive earthquake and fire damage to downtown Santa Rosa once belonged to Henry Hoyt’s daughter, Frances H. Gove (d.1993 in Monterey, California). The photographs were found in a Monterey bookshop by a dealer in 2002 and obtained by the library in 2005. Henry Hoyt and Frank Hoyt are presumed to be the photographers. The collection includes 32 photographs of the damage to the downtown area of Santa Rosa, California from the earthquake and fire of April 18,1906. They are 8” X 10” black and white photographs. The collection also includes one original Press Democrat newspaper issue from April 19, 1906, and two clippings of newspaper articles using Hoyt photographs on earthquake anniversaries. The contents of the collection are organized in two boxes and one binder. 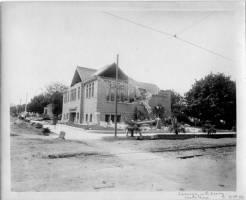