Iva Warner was an activist, environmentalist, and teacher. She was an active member and president of the environmental group Sonoma County Tomorrow, and participated in battles over coastal development and protection of North Bay waterways.

She was a leading player (along with both Sylvia McLaughlin and Dorothy Erskine)in the fight to keep Warm Springs Dam, which created Lake Sonoma, from being built on the Russian River. Though environmentalists lost that fight, the U.S. Army Corps of Engineers redesigned the Dam so it would be more sensitive to the environment and future potential earthquakes.

Warner was prominent in the effort to form the state Coastal Commission to protect the coastline from over-development, and the succeeding Coastal Act of 1976. Another focus was to pass the State Water Conservation Initiative, an attempt to revise water law established in 1928.  Her other projects included opposition to aqueducts which could have opened all of Sonoma County to development; protecting the fisheries in the Eel and Russian rivers; proposing land disposal wastewater reclamation; implementation and monitoring of the Sonoma County and Santa Rosa General Plans; farmland preservation; and opposition to stream channelization.

The collection consists of four boxes of materials and one scrapbook. 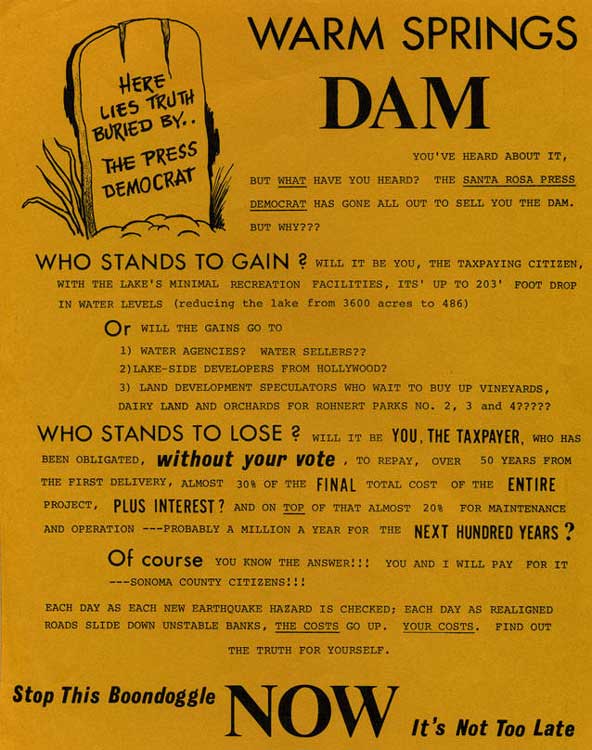