Journalist Rubén Salazar began his journalism career at the El Paso Herald-Post as their first Latino reporter. He then wrote for Santa Rosa’s Press Democrat in the late 1950s before moving on to the San Francisco News. In 1959, he accepted a position with the Los Angeles Times, where he was working at the time of his death.

During his tenure with the Los Angeles Times, Salazar was a foreign correspondent in Vietnam and the Dominican Republic and Times bureau chief in Mexico City. As a domestic reporter and columnist, Salazar covered unemployment issues, the quality of education, and housing conditions. In 1970, Salazar authored Stranger in One’s Land, an official account of the 1968 U.S. Commission on Civil Right’s hearing in San Antonio, Texas to address problems confronting Mexican Americans.

By 1970, Salazar was news director of KMEX, a Spanish language television station in Los Angeles, and wrote a weekly column on Chicano/Latino affairs for the Los Angeles Times. On August 29, 1970, Rubén Salazar was killed by a tear gas projectile fired by a Los Angeles Sheriff’s Department deputy during an East L.A. riot. Salazar was posthumously awarded the Robert F. Kennedy Journalism Award in 1971, and in 1999 the California Chicano News Media Association established the annual Rubén Salazar Journalism Awards.

In March 1979, Sonoma State University named its library in honor of Rubén Salazar. In 2002, soon after a new library building was constructed, the Rubén Salazar Library building became Salazar Hall. Salazar Hall is now home to administrative and educational functions, for a number of years including the university’s Journalism Laboratory.

In 1979 the new library at Sonoma State University was named after Rubén Salazar. Clippings of articles written by Salazar during the 1950s and 1960s for the local newspaper, the Press Democrat, were compiled and became the root of this collection. Salazar’s wife, Sally, who attended the Library dedication with her children, donated copies of photographs of Salazar. Materials about the SSU Library dedication are also included in the collection, as well as items relating to the addition of the 500,000th book to the library collection—Border Correspondent: selected writings, 1955-1970, edited by Mario T. García. Since then, the collection has expanded to include articles about Salazar’s death and documentaries about Salazar’s life. 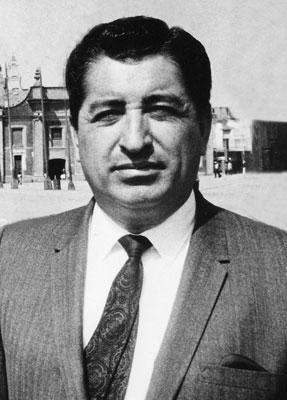