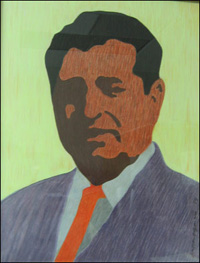 This piece is by Rupert Garcia, copyright 1979, all rights reserved

Ruben Salazar, born in 1928, was eight months old when his parents moved from Ciudad Juarez, Mexico to El Paso.  He became a naturalized citizen, attending public schools and the University of Texas at El Paso, then known as Texas Western College.  He received a bachelor’s degree in journalism.  Salazar began his journalism career at the El Paso Herald-Post, launching a career of many “firsts” for the mainstream press.  As the first Latino reporter at the Post, he crossed into English-language journalism.  He became the first Latino foreign correspondent, and the first Latino columnist, to name a few.

In 1956-1957, Salazar worked in Petaluma for The Santa Rosa Press Democrat.  He moved on to the San Francisco News and in 1959 accepted the opportunity to work for The Los Angeles Times.  During his tenure with the Times, Salazar was a foreign correspondent in Viet Nam and the Dominican Republic and Times bureau chief in Mexico City.  Salazar’s coverage of the 1965 U.S. Marine intervention in the Dominican Republic received high acclaim.  As a domestic reporter and columnist, Salazar’s topics were also “firsts”: the inferior quality of education, unemployment, poor and restricted housing conditions - essentially the full range of problems facing Chicanos in Los Angeles.  His reporting earned him a state Medal Award for best local news coverage in California.

“Stranger in One’s Land”, Ruben Salazar’s account of the 1968 U.S. Commission on Civil Rights hearing in San Antonio, Texas, appeared as a commission publication in May 1970.  This unique report was published for the purpose of stimulating public concern for the problems confronting Mexican Americans.

By 1970, Salazar was elected Chairman of the Chicano Media Council, was news director of KMEX, a Spanish language TV station in Los Angeles, and wrote a weekly columnist on Chicano affairs for the Los Angeles Times.

On August 29, 1970, Ruben Salazar was killed by a tear gas projectile fired by a Los Angeles Sheriff’s Department deputy as he was seated outside a restaurant.  He had been taking a break from his assignment covering the Chicano Moratorium, an anti-Viet Nam war demonstration in East Los Angeles.  Salazar was 42.

Salazar was posthumously awarded the Robert F. Kennedy Journalism Award in 1971.  In 1999, the California Chicano News Media Association established the annual Ruben Salazar Journalism Awards.  The awards recognize work published or broadcast in California that exemplify journalistic excellence while contributing to a better understanding of Latinos.

In March 1979, Sonoma State University named its library in honor of Ruben Salazar.  In 2002, soon after the library moved into a new building, the Ruben Salazar Library building became Salazar Hall.  Salazar Hall is home to administrative and educational functions, including the Journalism Laboratory.

Resources by or about Ruben Salazar in the Sonoma State University Library include: