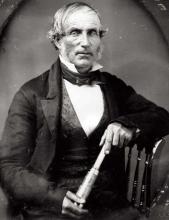 Courtesy of the Sausalito Historical Society

Alta (Upper) California Governor, Juan Alvarado, described William Richardson as "an educated man who had many friends because he was a man of principle and fair to all who had any dealings with him," and "was of an extremely gentle and generous nature."

On March 27th 1999 a monument was unveiled in Richardson's honor. The monument, a huge boulder with a ship's anchor and plaque, is located on the seawall adjacent to the Venetian steps in Gabrielson Park, Sausalito, California.