Notable utopian communities existed in Sonoma County during the last century and earlier. Here are capsule summaries of a few prominent settlements. 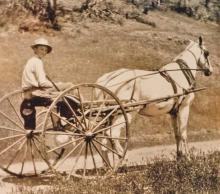 Thomas Lake Harris, a minister and poet, founded his "Brotherhood of the New Life" in upstate New York before establishing a settlement at Fountain Grove, located in the foothills of northern Santa Rosa. Lasting from 1875 to 1892, Fountain Grove encompassed over 1500 acres, many of which were covered with vineyards. Members turned over their worldly possessions and worked in the vineyards and winery, while Harris lived in a beautiful mansion on the property. A compelling speaker, incorporating a philosophical mix of socialism and mysticism, Harris was known for having unusual ideas about sex and was accused of adulterous behavior by a San Francisco Chronicle reporter. Although supported locally in Santa Rosa and by the members of his community, Harris left Fountain Grove in 1892 and deeded the property to his adopted son, Kanawe Nagasawa. This effectively ended Fountain Grove’s existence as a utopian settlement. A Harris follower, Nagasawa is known for designing and building the Round Barn on the ranch, which stood on the corner of Mendocino Avenue and Bicentennial Road until it was destroyed by the Tubbs Fire in 2017.  Fountain Grove proved very successful as a grape growing and wine making concern both during and after Harris’ stay.

Arcana of Christianity : an unfolding of the celestial sense of the Divine Word through T. L. Harris  (3rd Floor Stacks BX9998 .H25 1976)

Religion and life of Thomas Lake Harris, founder of the Brotherhood of the New Life  (Theses D1972 Y85)

Icaria-Speranza was a utopian community founded by French immigrants forced to leave France for their political views. Followers of Etienne Cabet, a journalist, lawyer, teacher, and philosopher, they based their social experiment on the enlightened communistic utopia described in Cabet’s novel, “Voyage en Icarie“. The agrarian-based community fostered a solidarity designed to promote peace and equality. Settling just south of Cloverdale on 885 acres, vineyards, fruit trees, wheat, and flower gardens were planted. Financial difficulties and the inability to recruit new members doomed the venture. Additionally, the abundant harvests created a desire for profit, which was counter to the proto-communist economy and social structure. Lasting until 1886, it was the only Icarian colony in California and the last of seven settlements in the United states.

Altruria was founded by Unitarian Reverend Edward Biron Payne and 30 followers who were inspired by William Dean Howell’s novel, "A Traveler from Altruria", and the Christian Socialist movement. Cooperative Councils were formed on both sides of San Francisco Bay and in 1894 the community bought 185 acres a few miles up Mark West Road near Santa Rosa. Most settlers were working families, a majority of them artisans. The community built seven houses by the end of the year, but a few months after Altruria was founded, a plan to build a hotel on the property created serious financial hardships. No longer viable, they broke into three smaller groups, lasting another year before disbanding.

On the road to Utopia: the social history and spirituality of Altruria, an intentional religious community in Sonoma County, California, 1894-1896 (Regional Collection HX655.C2 O38 2000a)

Less a utopian community than a health-oriented religious colony, Preston was located north of Cloverdale on Oak Mountain. Life centered around the Christian teachings and medical practices of faith healer Madame Emily Preston, who was said to see through people with her "X-ray eye." She patented and then dispensed medicines through a thriving mail-order business. Most of her medicines were alcohol-based. Emily and her husband Hartwell held religious services at their home and advocated a direct personal relationship with God. The new faith was called the Religion of Inspiration. Many skeptics accused Mrs. Preston of "quakery" and "occult spiritualism". Some claimed she was delusional. Attempts by doctors to have her prosecuted for the illegal trade of drugs failed. She was eventually stopped from dispensing her medicines by the passage of the Pure Food and Drug Act.

Emily Preston eventually won over many critics and became a respected figure in northern California. The settlement was successful and productive. When Preston died in 1909, the settlement lost its economic base and gradually diminished through attrition. Most of the Preston buildings, including the Preston Mansion, were destroyed in a fire in 1988.

Go tell it on the mountain; an account of Madam Emily Preston with prefatorial note on the Preston papers. (Theses D1976 .P3)

Morning Star Ranch was founded by Lou Gottlieb, a member of the folk trio Limeliters and subsequent hippie spokesman. Known as the "digger farm", he invited all comers to join him on his 32-acre spread on Graton Road. People living there built their own shelters, dug toilets, grew food, and engaged in open drug use. Much of the food was used to supply the Free Food programs in San Francisco. Citing health code violations, Sonoma County authorities eventually came in and leveled Morning Star's tents and cabins.

Wheeler Ranch was founded by landscape artist Bill Wheeler on a 320-acre ranch along Coleman Valley Road. Wheeler opened the ranch to everyone after county authorities began rousting the residents at Morning Star Ranch. When Morning Star was leveled, Wheeler Ranch continued as a quintessential hippie commune until the bulldozers arrived in 1973. Wheeler Ranch was written up in the June 1970 issue of Harper's. The book "Living on the Earth", a best-seller in the early '70s, was written while author, Alicia Bay Laurel, was living on the ranch.

Books: The Morning Star scrapbook : 'n the pursuit of happiness

Situated on 80-acres of the former Farallones Institute on Coleman Valley Road, the Occidental Arts and Ecology Center (OAEC) is a non-profit educational center and biodiversity focused farm. OAEC's programs offer innovative and practical solutions to the pressing environmental, economic and social challenges of the day. Founded by a group of biologists, artists, activists, educators, and horticulturists, eight partners live on the property in an "intentional community" where meals are common and residents are private. Decisions are made by group discussion and compromise.

Other books on regional utopian communities: